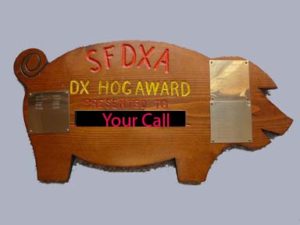 recipient is generally considered a nice ham except in pileups, and

recipient is usually a considerate operator except when chasing DX, and

recipient is known to work the DX first and then spot it on the cluster, and

recipient has been known to display a piggish attitude in working them first,

HEREAFTER AND ALWAYS shall recipient be entitled to be called a DX HOG !

The recipient MUST display this award in a prominent place in the recipient’s Ham Shack. If this award is not found in the shack by fellow member DX Hogs, recipient shall be liable to buy said member the beverage of their choice.

Signed, verified and attested to by the DX HOG Committee Chairman – W.E. Snortum

This award is presented during the Annual DX dinner, or other suitable forum, and has been a traveling award since 1980.

The FINE PRINT: The newly installed DX HOG can negate the consequences of the last requirement, i.e. having to buy the other DX hogs drinks for non-display of the HOG in the Shack in only one way: recipient must wear the honorable DX HOG HAT for the duration of the Hamfest while in and or around the Hamfest premises.